I Sing The Lyrics That Move My Soul

Despite all odds, I have lived a very fortunate life. A lousy start was no reason to fall into a heap and cry into my tissue. What made this so? From so young, as a UK primary school kid, I was, despite my youth, influenced by the amazing 60s avalanche of music. I was captivated by The Beatles, I loved Elvis from the 50s, I was aghast at the Rolling Stones – I just loved being influenced.

It was my escape. It was the music that made me close my bedroom door and fly away in my head to fantasize about a different life, where people would scream and desire me…. and I could sing to them.. and all would be well with the world. But, it was more than an escape. The lyrics and the tunes just rocked my soul. Made me feel deep inside emotions that I guess were too intense to be expressed, except through the music.

Love, anger, sadness, confusion – all these ‘little people emotions’ were attached to the rollicking 60s and I have never been the same since.

What it was to hear Lennon scream ‘Help me if you can….’ and Gene Pitney and his ’24 Hours to Tulsa’. Dusty and her ‘Son of a Preacher Man’ Cilla and her ‘You’re My World’ and Kathy Kirby’s ‘Turn Around’ – and Elvis with his ‘If I can Dream’. The Bee Gees and ‘Massachusetts’ and the Flowerpot Men with whatever it was that made them so cool.

As a kid I wanted to be a drummer. I drummed on my mother’s pots and pans with knitting needles. Then had to find someway of creating a snare drum – so an old board type little suitcase was turned upside down with a tin of coins placed atop, and that became my snare.

Eventually as a teenager, I joined a band. Bought my first drum kit and hey I was away with the fairies.

The lead singer at the time wrote his own songs, and I thought they were weird and I could do better. That started my writing. Being an untrained musician, and a drummer, the only way I could write was to hear a melody in my head and a rhythm in my feet. I then sang to someone who would write down my music in noted form. This particular band went on to win the Battle of the Bands in Johannesburg in 1976. I was allocated one up front song from behind the drums – I sang my heart out – I exorcised my emotions
for that night.

I evolved in the 1980s. I co-formed an all girl band here in Johannesburg, The Insisters. We performed our own material, and we actually played our instruments !Insisters and su 7 singles 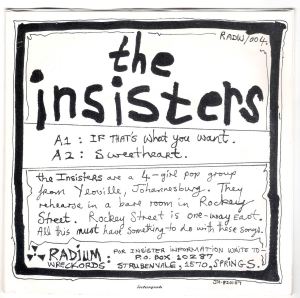 We became popular. We gigged. Crowds loved us. WEA signed us. We played with the Radio Rats, Asylum Kids, Dog Detachment, Lesley Rae Dowling, Panther…..We made records. We appeared on tv, radio and in the press. Hey days. Our biggest claim to fame was ‘If That’s What You Want’ written by Linda Dawson and myself, with a flip side of the (yes) 7″ single being ‘Sweetheart’. We split.

I went solo. One record out on WEA – ‘I’m Amazed’ coupled with ‘Someone’

The Insisters, in a new guise, reformed for one night only in 1997 or so. One had died. One had left the country, one was who knows where and the remnants played this show in Braamfontein. We had a ball. Rocked the place. A lifetime of needing adoration came true – as I left the stage, I was grabbed by some young fans and hugged and held. That’s the life.

Jonathan Rat from the Radio Rats had said to me “Go work with Gary Herselman’. He will help arrange your songs and record with you, and that is what I embarked upon in the early 2000’s. We recorded, about nine songs in various studios. In 2007, I asked him to back me in my ‘sing for my supper 50th birthday bash’. He did. I loved it. I think he did too. To perform and feel and expose your emotions after not performing live for many years was frightening, but intoxicating. I loved being back in the forum.

I devised what I now call the ‘Su Insister Privately Live’ concept. Hire a restaurant, get a set menu, a small cover charge for Gary, invite your friends and have some fun. 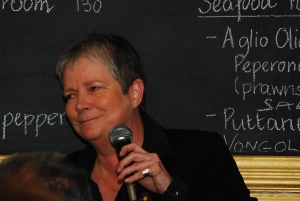 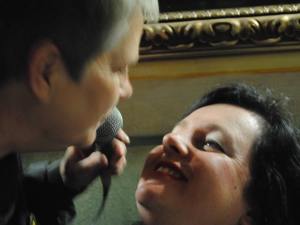 The ‘Privately Live’ shows became almost torch-like. Gay folk – old and young – coming out for an evening of music. It expanded to include selected heterosexuals. I don’t stand there at 50 plus and bust my gut and shed tears. I walk around and chat, flirt, rock and blues it.

My emotional well being was settled many years back. My pain, my emoting, as one does when one is younger, had long ceased.

I camp it up. I sing my songs. I have fun with my friends and audience. I express the emotion of my lyrics. I can do this. I am me. I sing. I interpret.

Su Insister lives, she is Privately Live. She is full vocal throttle.

12 thoughts on “I Sing The Lyrics That Move My Soul”