South Africa’s best current affairs/magazine tv programme Carte Blanche recently aired a programme on a pensioner in frail care being attacked by their care-giver. The most awful and disturbing footage substantiated the accusations.

Now, I have always had a weak spot for elderly people, I am not sure where it stems from, but I have always hoped that they were safe and cared for. That someone loved/loves them. Someone cares.The footage on Carte Blanche rocked me. Brought tears to my eyes. There was this elderly lady, in a frail care facility in the Eastern Cape being smacked over the head, face, arms and body with deodorant bottles, hands, fists and hairbrushes all with verbal abuse chucked in for good measure. How do elderly people protect themselves from this; how do they survive the trauma at such an advanced age? 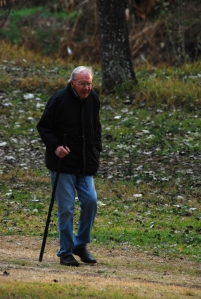 Care-givers in retirement homes and frail care facilities, surely are supposed to be trained to cope with the idiosyncrasies of the aged. Sometimes they are not easy. Sometimes they are ill: dementia, Alzheimer’s and Parkinson’s.Sometimes they are just plain and simple old people who have lived a long life and weathered all that it chucked at them and are tired!

The visuals haunt me of this poor old woman cowering; trying to fend off the blows to the face and head and body. No doubt confused, terrified and helpless.

The visuals cause terrific anger in me as this so called qualified care-giver belts this woman of over 80 years of age. Showing lack of control and immense disrespect and failing by far in her duties as a care-giver to ensure that whatever time left this woman has, that she is warm, safe and cared for.

It is atrocious. Unforgiveable. Sickening.

I am not interested in the why’s and wherefores of elderly abuse. You are either trained and qualified or you are a disgrace to society. I am not interested in disciplinary hearings or labour law – how can care-givers break the trust of those entrusted to their care, and how can the management of these establishments purse their lips in shock and horror after the fact – they were tasked to ensure that it should not take place in the first instance.

It is the same with the rape of the elderly. How on earth does a 89 year old woman recover from the trauma of rape? If rape is about power, what power is gained by the rape of women of such an advanced age.

I cannot go, even in my mind’s eye, to the terror elderly people must feel when being beaten or raped – I can’t go there.

I will never salute nor condone the existence of these cruel bitches and bastards!

2 thoughts on “Make A Choice: Care-Giver or Granny Beater”