As summer crawled into autumn and crawled into winter I haven’t been out and about much in Johannesburg. So, deciding to brush the cobwebs off, I decided it was time for us to go plane ‘shooting’, we picked up our cameras, jumped into the car and headed off to O.R.Tambo International Airport.

Having researched via the Internet the best photographic spots to ‘shoot’ incoming planes with our Nikon’s we were aware we had to keep our eyes peeled while carrying our expensive gear. We found the perfect spot, at the bottom of the runway embankment where the planes come in to land – meaning they will fly right over our heads! Yippee! Yay! Wow. The excitement.

Quite a desolate, industrial area, quite a bit of traffic, some strange stares, and interestingly enough like our sojourn to Lanseria International Airport earlier in the year, a police car approached and enquired as to what we were doing “Taking photos of planes” we replied. “Don’t stay long and be careful” was their response.

It is eerie when one’s hobby becomes so much of a risk taking exercise.

So we watched each other’s backs, clicked merrily away for an hour, and with glum faces sought other areas around the airport to get the photos we wanted. 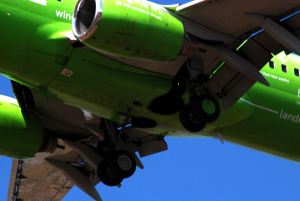 We went to the far side of the airport but of course masses of concrete pylons and walls and barbed wire inhibited our view. 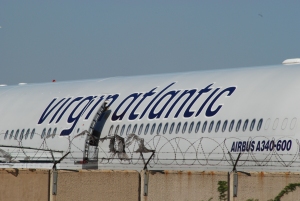 It was interesting, yet frustrating to feel that a great past-time now made you a visible and sitting target for attack. Having been attacked from behind by two knife wielding men in Hout Bay in the Cape six years ago, I decided we should take no further chances… but pursue our next favourite hobby of finding somewhere nice to eat on the way home.

Eventually we decided on Café del Sol in Olivedale, Johannesburg. Shaking off the disappointment with a beer and some vino we pondered the similarity of the police activity at both airports whilst tucking into some very fine Italian food for comfort. It’s a nice medium sized restaurant, and we had managed to bag a table outside. Service was good. Food excellent, nice cutlery and glassware, linen napkins. A tad pricey, we calmly soaked up the ambiance and a most excellent chocolate tart.

It’s a strange life we lead here in Jozi town. So much goodwill, healing and friendliness only to be interrupted by the ever-possibility of mugging and theft.

PHOTO'S SEE WORDS THE MIND THINKS Life is how you see it - sometimes in pictures and sometimes in text but always with a mind's eye. Sue Charlton is active in the media, creative and public relations industries in South Africa. View all posts by Sue Charlton